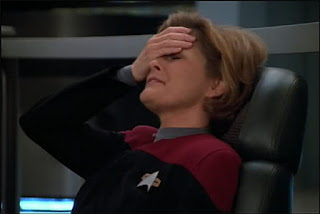 We're back again with Episode 7, in which we spend an hour discussing the many reasons Captain Janeway is the worst captain in Starfleet. Yes, worse than the captain of the U.S.S. Grissom (very nerdy Star Trek 3 reference; if you've seen it enough times, you know how bad that guy was, and Janeway is worse). It's not all negative, we also talk about some of the captains we love, plus general Star Trek nerddom (my spell-checker is flagging that word, nerddom... not sure it's legit).
In our second hour Tom introduces us (myself included) to the world of Dark Souls 3, and it seems pretty damn cool, so you should listen if you're not familiar... or even if you are, because it's awesome.
In the show's third hour, we chat up our experiences with tabletop role-playing, and detail the various games we've played together. (Warning: extremely nerdy)
In the fourth hour M. Bison pulls over his truck while Tom re-discovers some classic Kubrick flicks he recently had a chance to re-visit in the movie theater.
The episode isn't really four hours, it's called comedy you noobs. It is, however our longest yet, but it won't seem like it because we're the most interesting guys in the world, screw that Dos Equis guy. Gaming AM. The most interesting podcast in the world. #JanewaySucks